All kinds of Central and State Taxes on the sale of goods and availability of services are over. Only one tax is left in his place. Only GST will apply. Whose full form is (Goods and Services Tax). In this article, we will talk about GST.

• Being part of the tax system, traders are joining it, but its funda is still not that easy for them.
• In this, we are telling what changes GST has brought in the tax system. How this common person has brought better Opportunity for people of all levels related to the business world. How is leaving this positive effect from the market to the economy of the country?

GST i.e. Goods and Services Tax. As it is clear from its name that it is also a kind of tax, which is on the consumption of services and goods. You have to pay tax called GST on them. Whoever will buy goods or get services, it is being applied in place of all types of State and Central on the sale of goods and services across the country.

What was Behind GST? (GST Govt in)

• Everyone made their own rules and fixed the categories. In the same affair, many taxes on each item and sometimes tax on tax were also created. Small traders and companies often got entangled in these rule laws.

• GST has been introduced as a unified law to remove these anomalies, which can be imposed on both goods and services from production to sale. • To eliminate the individual screws of production and sale, only one basis of GST has been fixed, Supply. For this, the tax laws were changed. The process of constitution amendment was adopted in the Parliament. Due to which it took so long for the GST law to be passed.

Demerit Of Earlier System
In the old system, the tax was quite a mess, for example, by taking the goods in a factory, it was first imposed on excise duty i.e. Excise Duty. And often, additional excise duty was also levied on goods. If the same goods entered from one state to another, Entry Tax was imposed. After this, Chung is separately from place to place. At the time of selling it was also called Sales Tax. At times Purchase Tax was also used. On some items, the luxury tax used to be different, 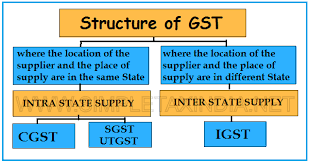 Tax on consumption rather than manufacturing Tax on Consumption

GST tax has to be paid to the user of goods and services. However, the responsibility of its recovery rests with the seller of the goods or services. This means that when the shopkeeper gives any goods, he will separately write the GST in it. Whomever the buyer is will have to pay the entire amount including GST.
How many taxes are there in a product? Now you know how much total tax is imposed on a product. The government has already fixed the rates for everyone.

Now according to GST rules, every purchase in the supply chain will have to pay fixed tax on the sale. So will tax become expensive at all levels? It would have become expensive, if not the Tax Credit System. In this system, every next buyer of the supply chain gets back the tax paid by the seller before him.
In the GST system, there is also a provision to get back to the place where the tax has been deposited before the last stage of taxation.

No Cascading Of Taxes

Now GST has to be paid to the consumer only. If someone has deposited in the middle, then his money is adjusted back from the tax credit system.

There is a special emphasis on Self Monitoring in GST. Information on all deals is to be kept online. Receipt and giver of every transaction have to be with both. Both will be able to get Tax Credit through their respective receipts. If the deals are not matched anywhere, then online is bound to be caught. The tax chain will not be broken by the responsibility of depositing the GST in the deals with the top businessmen at every stage.

The GST Council has been created in the provisions of GST or for any kind of changes in rate. It will be headed by the Union Finance Minister and the Finance Minister of the states will be its member.
The Center will have one-third power to give Vote on any decision, and two-third power will be with the State Governments. The Voting Power of every state will be equal, be it big or small. He will need three-quarters of the Council’s votes to approve any decision.

Less tax is being levied on items of common need. More useful items of Common People will be available cheaply. A large section of the public will get its benefit. • An unnecessary increase in the cost of goods will not be increased due to the elimination of various types of tax and tax on tax. Obviously, the prices of goods will not increase too much. This would be a better situation for the Common People. • An increase in the income of the government by increasing the maximum share of the market under GST will also improve the level of public amenities like education, health, transportation.

• The Central and State Governments give concessions to small scale industries and enterprises, to take advantage of this, large enterprises were kept small in many parts. Now it will not be needed. Large enterprises will be able to make more cheap and competitive goods. Will become a competitor in the international market.
• Due to the different structure of taxes in every state, it was not easy for businessmen to understand them. Different kinds of duties used to increase the burden separately. Now businessmen will not have to go through these problems. Business speed will increase and the number of benefits will increase.
• Reducing the number of taxes for the Central and State Governments will reduce the burden on officers and employees. With all Details available online, monitoring of the system will be much easier Recovery costs will decrease. 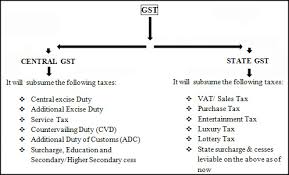 State Taxes those Replaced By GST

Central Taxes Those Replaced By GST

The taxes levied by the Center and states under the GST have been included in only three taxes.

1. Central Goods and Service Tax (CGST) If the transaction of goods is happening between two parties of the same state, then this tax (CGST) will have to be paid by the central government. 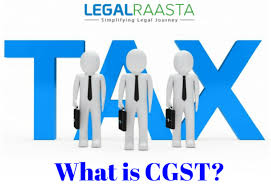 2. Integrated Goods and Service Tax (IGST) If the transaction of goods is taking place between two parties of different states, then this tax (IGST) will have to be paid by the central government.

3.State Goods and Service Tax (SGST) If the transaction of goods is taking place between two parties of the same state, then this tax (SGST) will have to be paid by the state government. 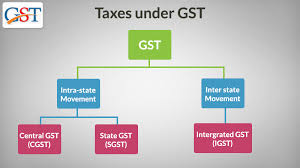 Note: In case of the transaction within the state, you will have to pay two taxes on each Deal. CGST to Central Government and SGST to State Government.

How To Get Tax Credit?

Here we see that everyone paid in the order of purchase of goods. First Whole Saler, then Retailer and then Consumer. Then what is the funda of what was told earlier that only consumers will pay GST? Let’s understand. Actually, Whole Saler and Retailer in their turn had deposited the GST, they can later get it back from the government through Tax Credit. While filling the Monthly Return of GST, they can adjust it in their liability.

This is the process of adjusting the tax, it has been named the Tax Credit System in GST. Businessmen coming to the middle stages will be able to take advantage of this tax credit arrangement only if they have a receipt for the sales made at those stages. 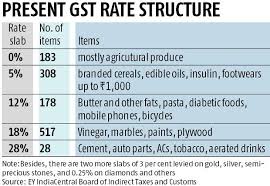 Similarly, education and health facilities are excluded from the purview of tax. The GST Council has approved a total of five slabs of GST for different types of goods. These are zero, 5%, 12%, 18% and 28%. An attempt has been made to make GST more and more fair by imposing a minimum tax on essential commodities and maximum tax on luxury and less important items. For example, 28 percent of GST has been fixed on Air Conditioner, Refrigerator, Makeup, etc. While Zero tax has been fixed on raw materials like grains and fresh vegetables etc.

How to be paid tax in GST system 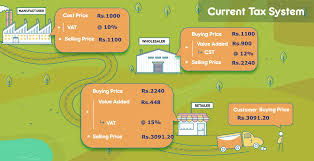 • First, the goods from the producing company go to Wholesaler
• From Whole Saler then the goods go to the Retailer
• From the retailer, the goods then reach the consumer.

As we mentioned above, GST will be recovered from the buyer. But before this, the GST is to be collected every time there is an increase in the price of goods on which the value addition has occurred (due to change in the form of goods or any other cost). The GST will be recovered from the previous buyer who paid the GST when he sells the goods to another. So now this situation will be-